Mothers Love: Watch this exceptional clip that proves that mothers love is only second to God's love 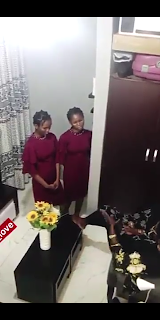 In many occasions, mothers are being celebrated, do they really deserve such celebrations? Well that you will find out in this article. The love mothers have for their children can be attributed to the fact that a child's life begins in the body of his/her mother, and even after birth, the bond between mother and child still seems to be inseparable.

The video below shows the moment a lovely mom demonstrated her love for her daughter, unknown to her that she was being pranked.

In the video, two twin sisters had planned to prank their mom with the news of being pregnant. The twins are just teenagers who are under 18-years-old.

The two twins were quick to get her curious before they even told her about their suspicious that the younger sister was pregnant.

Their mother broke into tears, before descending on them only to find out that it was all a prank. But she did cried for her daughter initially, as she taught her daughter has been impregnated by some small boy.

February 01, 2021
EPISODE 3 Cynthia's Show The time is 8:45 am, Destiny College looked scanty as many students were yet to resume school. Destiny college is one best school around Baldos Estate. Though it is the type of school a multimillionaire child would attend, they are known for excellence. Wow! guess who we have here? A mockingly echoed from the mist of a group of girls at the doorpost. Steve already recognized the voice and knew what was coming. Before he could raise his head, another voice came, but now it was a group of voices shouting "the butt chaser" immediately almost everyone in the class burst into laughter. Steve bent his head and pretended like he was looking for something in his bag. Just then Steve felt a touch on his shoulder and a familiar voice followed, "looking for something?". The girls at the doorpost retorted "what could he be looking for?" He is probably hiding his face in shame, another echo of laughter ensued. Steve still did not bother to
Post a Comment
Read more